About Us Search Sign up to our newsletter Menu
Connessioni - Bridging Worlds > References > Yamaha AFC: its acoustics at every location

Yamaha AFC: its acoustics at every location

Yamaha AFC: its acoustics at every location

The Yamaha Active Field Control system, designed to study and calibrate the acoustics of locations, has recently been updated. The fourth version includes AFC Enhance and AFC Image upgrades.

Yamaha is very well versed in the field of acoustic studies. In fact, the Active Field Control (AFC) immersive audio system was launched way back in 1985 in response to the growing diversification of venues and the need to host a wider range of events, and is the result of studies carried out by Yamaha since 1969, with the aim of finding the right balance between artist, audience and environment. AFC, moreover, has been constantly updated over the years to meet the increasing demands for accuracy and reliability in the acoustics of the locations, and to implement the many technological improvements that have followed one another since 1985.

What does AFC do? Quickly said: it’s able to change the acoustic response of a space at the touch of a button. “With this update – explains Yamaha Project Manager Wouter “Tony” Verkuijl – we enter the fourth generation of AFC, more powerful and open to a new dimension. The idea is that the perfect sound in an environment can be obtained not only with expensive and not always practicable architectural interventions, but also thanks to a software-based system, which can also be managed directly from the Yamaha consoles. With AFC it’s possible to increase or decrease the reverberation time, which makes the difference, for example, between a concert hall – which requires a long reverb – and a cinema screening room. The same environments can be modulated according to the needs of the individual event, all in favor of better listening”.

The updates of the fourth generation of AFC can be summarized in AFC Enhance and AFC Image. AFC Enhance is the part of the system most explicitly dedicated to audio: it controls the reverberation of a space, taking advantage of the natural acoustic properties of the existing structure, and controls the propagation of sound within the space, so that the reverberation and volume can be altered while maintaining the natural sounds of musical instruments and voices. 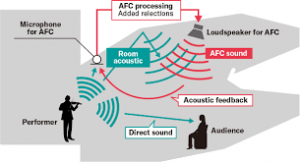 AFC Image, on the other hand, allows users to control the perceived positions of acoustic images within a space. Immersive systems, moreover, allow you to position and move acoustic images wherever they are needed to produce the desired effect regardless of the position of the listener. Among the features of AFC Image, we particularly highlight the speaker zoning function, which assigns object sounds only to the desired speakers within the system, and the binaural output which allows users to experience the sound in headphones.

In practice, the fourth generation AFC system is based on the microphone capture of the audio of an environment, in all its parts. The sound is then processed (the processor is the heart of the system) and at the end with the speakers and with filters it’s possible to achieve what, otherwise, it would be necessary to achieve with architecture: structuring the acoustics of an environment as needed, with a simple button. Each room can save different presets for as many types of acoustics, to be used later in its events. Finally, it’s also possible to “export” acoustic models of famous rooms to use them if necessary also in other locations, to obtain the best effects.