About Us Search Sign up to our newsletter Menu
Connessioni - Bridging Worlds > References > Sony at Fuorisalone 2018 in the sign of Arthur C. Clarke

Sony at Fuorisalone 2018 in the sign of Arthur C. Clarke

“Hidden Senses” is the name of the complex and fascinating multi-sensory installation proposed by Sony for the Milano Design Week, just ended: a journey into “domestic future” between sounds and images.
During the visit to Sony “Hidden Senses”, in the Spazio Zegna of via Savona 56, in Milan, we thought of a famous phrase by Arthur C. Clarke. The great science fiction writer, author with Stanley Kubrick of the script of “2001 – A Space Odyssey”, said: “Any sufficiently advanced technology is indistinguishable from magic.”
It seems that even Sony designers who have created “Hidden Senses” have thought about this statement, because the installation is a journey through audio/video technologies often futuristic that could find a place in tomorrow’s homes. Mind you: nothing is disturbingly new, because the coupling of projectors and proximity sensors, which allow you to interact with the projection, is not a new concept, but it was born several years ago. The results, however, are often spectacular, and in some cases even a little disturbing. This is the case of the “companion shadow”: the shadow of a human figure projected on the walls while walking around the house and, in intentions, makes the person who lives in the house feel less alone. 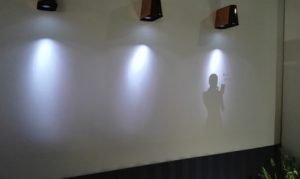 In reality, the reactions of most of the visitors were rather perplexing, not so much for the technology, refined, as for its application, more worthy of an Alfred Hitchcock film than a normal evening spent in the home.
The installation, however, has offered a variety of suggestions, truly on the border between technology and magic, to design domestic environments that can stimulate all the senses (even those “hidden”).
Senses hidden like projector models, mostly miniaturized, and hidden in everyday objects, which are animated and interact with people thanks to the projections. 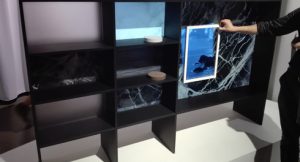 Five scenarios are proposed: Echo, Under the Light, Tactile Objects, Abstract Electronics and Day & Night. As the name implies, Echo is a sound installation: a floor and columns that, stimulated by the passage of people or by small touches of hands and feet, emit sounds linked to nature. 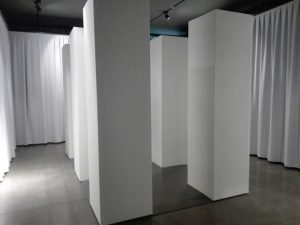 Very interesting are also the objects of daily use (vases of flowers, furnishings, frames) that “change” to the passage of visitors, or that modify the image contained depending on the pages that are browsed on a book… And again, wallpapers of libraries that change color and matter, virtual butterflies circling around flowers or virtual plants that change in relation to the external climate. In short, that of Sony (and Arthur C. Clarke) is a house “alive”, animated and fantastic, technological and magical, even a bit’ disturbing. 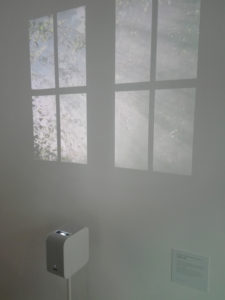 For Sony, this 2018 edition marked a return to the Fuorisalone after a few years absence. We can not but define it, irrespective of individual aesthetic evaluations, a good style return.
www.sony.it