The ceiling microphone Sennheiser TeamConnect Ceiling 2, distributed in Italy by Exhibo, is now Microsoft Teams certified, a further achievement reached by this innovative product based on beamforming technology.

The mission of the Sennheiser TeamConnect Ceiling microphone, now in its second generation, is ambitious: to make all conference participants well audible using a single discreet and performing device.
The secret is the adaptive beamforming technology, patented by Sennheiser, which automatically focuses on the voice of the speaker, regardless of where he is and whether he is moving in the room. In practice, microphones based on beamforming technology allow people to naturally speak, whether they are sitting, standing or moving. No one is forced to speak according to the position of the microphone, or to remain in an excessively circumscribed space for the voice to be heard well. 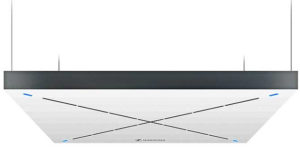 The new TeamConnect Ceiling 2 features as many as 28 omnidirectional capsules integrated into the array, and offers high audio quality, free of environmental noise. Furthermore, TeamConnect Ceiling 2 can be used together with existing analogue conference systems or it can be integrated into digital systems, controllable and monitored via the IP network.
Specifically designed for medium and large meeting rooms, the microphone is easily integrated into many different types of environments, and features PoE, Sennheiser Control Cockpit, Dante Domain Manager as well as supporting the QSC or Crestron control platforms. For larger rooms or those with a particular shape, it’s possible to combine several microphones to guarantee the best coverage.

The Senneiser TeamConnect Ceiling microphone is also Microsoft Teams certified, a further highlight of a product created to integrate and simplify the work for both technical managers in companies and users, free to concentrate on the topic of the meeting more than on microphone needs!