Sony 3D laser technology to illustrate the Acropolis of Siena

Sony 3D laser technology to illustrate the Acropolis of Siena

Forty-nine Sony laser projectors at the service of the Art Experience, to build a story made of images and music, which brings visitors back to ancient Siena, between historic buildings and experiential walks.

Opera Laboratori Fiorentini, a company that has a long and consolidated experience in the management of museum services and the organization of exhibition events, had the need for new video projection technologies to enhance the narration through images of the millennial history of Siena within ancient spaces and historical buildings. The main objective was to make the city, a medieval jewel of Tuscany and a UNESCO site, even more interesting and thus succeed in attracting, with new proposals, a greater number of tourists. Opera Laboratori Fiorentini has therefore commissioned IC VideoPro, system integrator specialized in design consultancy for the creation of innovative and engaging installations. This is how the multimedia path was created, which employs 49 Sony laser projectors involving various structures in the historic center, all close to the Duomo and its historic square: Chigiana Music Academy, Santa Maria della Scala, San Giovannino and, not far from Siena, Torre Grossa in San Gimignano. 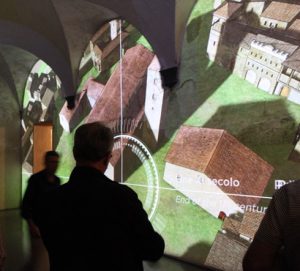 The aim was to involve tourists in surprising and innovative atmospheres, which expressed the history and values of the place. The new technologies had to be integrated into the museum paths of Duomo and Santa Maria della Scala with the dual aim of recovering historical memory but also of enhancing the new features of places closed to the public for a long time, such as San Giovannino. Some places were particularly dark and the Sony laser projection turned out to be a solution able to guarantee very clear images, as well as an optimal functioning for a long time.
In detail, the used projectors are four VPL-FHZ700L 3LCD models with 7.000 lumens, eight VPL-FHZ65 with 6.000 lumens, twenty-six VPL-FHZ60 with 5.000 lumens, of which sixteen for the complete installation in San Giovannino for “Divina Bellezza”, and eleven 4.100 lumens VPL-FHZ57, of which four specifically adopted for Torre Grossa in San Gimignano.

The Sony FHZ Series offer long-life laser light sources (up to 20.000 hours without maintenance) and WUXGA quality images, versatile installation and reduced costs, all features that make them quite functional. The projectors can be immediately switched on or off, without waiting times for the heating or cooling of the lamps. In addition, the silent operation and the thin design are well integrated with the context: a very involving cultural multimedia path, a sensory experience that enhances the history and culture of a unique city, which still feels its own ancient traditions.
In particular, the path “Divina Bellezza – SOTTO IL DUOMO – Paths of Light” rediscovers places never opened before to the public that wind under the Crypt up to the former Oratory of San Giovannino, where a 3D videomapping projection with sixteen Sony VPL-FHZ60 projectors supported by multilingual audio headphones immerses the visitor in the scenes of Good and Bad Government, the battle of Montaperti and other highlights of history of Siena. Instead, the nineteen projectors in Santa Maria della Scala recount the project “In Space and Time”, offering short pills on the history of the building.