About Us Search Sign up to our newsletter Menu
Connessioni - Bridging Worlds > References > Clair Live Experience: in Milan, a day dedicated to Clair Brothers PA

Organized together with the distributor Prase Media Technologies, the Clair Brothers event was held at the Idroscalo in Milan on 18 September and was attended by sound engineers and concert system installers

The Circolo Magnolia, next to the Idroscalo of Milan, hosted, on Wednesday 18 September, Clair Live Experience: an interesting demo day dedicated to the Clair Brothers PA systems, in particular Kit Curve and C8, as well as to the main monitor lines. All of this, on real stages in a suitable location, which allowed the technicians to test the products – so to speak – in their habitat. Kit Curve was first demonstrated: it’s a system based on a curved array for a total of about 1000W of total power, ideal for medium-sized stages. The Kit Curve TrueFit option is very interesting, which allows the user to customize the wave guide according to the area to be covered. In short, a way to exactly fit the system to the public and to the location, without approximations. For bass, there is Kit Sub, a single driver with 41Hz-250Hz frequency response. Kit Curve, overall, is an agile system suitable for a large number of applications. The second demo, dedicated to a slightly larger stage, saw the use of the C8 line array system, a bi-amplified three-way system with dual 8-inch drivers, a 3,5-inch compression driver and a 1,35-inch coaxial tweeter. The 3,5” compression driver is very interesting, effectively covering the entire midrange, while for the bass there is the 18” CS218M sub, with frequency response of 38Hz-180Hz. 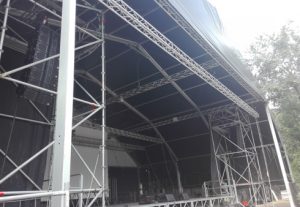 The element of the C8 system on which the accent was placed in particular (despite the location not allowing, due to the presence of buildings near the stage, to fully appreciate it) is the horizontal opening, which goes from 80° to 160°, and is able to serve even very large stages and large outdoor locations. Also in this case, the wave guide is True Fit: modular and can be shaped at will.

The day then continued with tests dedicated to stage monitors, in particular the 12AM models and the 1AM coaxial two-way monitor with 12” (LF) and 3” (HF) drivers. 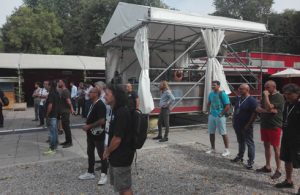 Overall, Clair Live Experience was a “targeted” event, around a particular class of products and above all focused on listening, on direct testing by professionals, on location and without mediation. During the demonstrations, you could turn and move around and on the stages, to appreciate the sound from all angles and… discover its secrets!