About Us Search Sign up to our newsletter Menu
Connessioni - Bridging Worlds > References > A turn of events for ISE!

A turn of events for ISE!

Starting in 2021, Barcelona will be the new “home” of Integrated Systems Europe.
The record-breaking show is preparing to change course, moving from the RAI in Amsterdam, the location that has witnessed the growth of the essential event for the AV world and Systems Integration, to the Gran Via in Barcelona for the edition scheduled from 2 to 5 February 2021. The announcement was intended to be made during an invitation-only press conference scheduled for 19 July, but a news leak in a Spanish newspaper led to the early release.
The move was reached by ISE’s management after reflecting on the future of the fair and probably inevitable given the latest edition’s numbers, which already gave us the impression of a “cramped” exhibition center in the face of 10% average growth for both exhibitors and visitors year after year. Just think of the logistical difficulties of ISE 2018, which required setting up an additional temporary hall to welcome the 1,296 exhibitors coming from around the world…essentially, if this is the trend, ISE’s staff will already have more than a few headscratchers for the 2019 edition!
In the press release, Managing Director Mike Blackman confirms the primarily logistical origin for the decision: “The RAI and Amsterdam have provided a fantastic location, contributing to the success of the show year after year. However, the continued increase in the numbers of participating companies and attendees showed us that limited floor space was in danger of putting a brake on the show’s development. The move to one of Europe’s largest and most prestigious convention complexes, decided upon only after listening to the opinions of companies and the public, will allow us to confidently plan for long-term development”. Blackman does not shrink from underlining that the next editions, 2019 and 2020, will still be focused on growth, regardless of the announcement.
From the upper echelons of AVIXA and CEDIA, the two global organizations that co-organize ISE, we are learning other strategic factors for the show’s new Spanish course. “The continued success of ISE and its decisive role in the AV business meant that we knew this decision would need to be taken before too long”, comments David Labuskes, AVIXA CEO. “Now we can work to control events and ensure that a smooth transition is possible”. Tabatha O’Connor, CEDIA Global President & CEO, explains the choice of Barcelona: “Not only is the Gran Via a state of the art home for our show, but the Catalan city is one of Europe’s most vibrant and exciting, both economically and culturally. It’s the perfect choice for an exhibition and growing industry such as our own”. 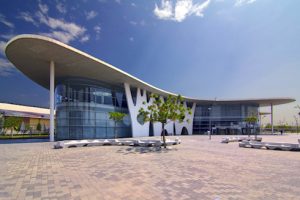 After the enthusiasm… what could ISE in Barcelona mean?
Starting with the numbers, the Fira de Barcelona – managed by a consortium that includes administrative bodies of the city and the Chamber of Commerce – boasts two exhibition centers that host 140 international shows each year with 400,000 m2 distributed over 14 halls. Integrated Systems Europe will occupy 200,000 in 8 halls, benefiting from functional architecture for logistics and services, thanks in part to its proximity to Barcelona’s international airport.
Will all this be enough to “replicate” the close relationship between Amsterdam and ISE’s public? It is still too early to say, so in the meantime we hope that the Catalan city will know how to welcome visitors just as well in terms of infrastructure, from transportation (especially the airport) to hotels and restaurants, and also when it comes to costs, maintaining reasonable prices even during the fair (the result of an accord between ISE and the city of Amsterdam).
A second reflection of a more general nature instead regards the country’s macroeconomic climate: Amsterdam is in the Netherlands, an area that is historically well-off and committed to commerce, while Barcelona has a lively but completely different reality. Let’s not forget that Spain has just recently recovered from the economic crisis and that the Catalan city has experienced the political contrasts of separatism first-hand.
Awaiting 2021, we “lovers” of ISE hope that Barcelona will not just be a new location, but that it assumes an active role in enhancing the development of the show and in welcoming its numerous public, just as RAI and the Dutch capital have done.
ww.iseurope.org
www.firabarcelona.com