About Us Search Sign up to our newsletter Menu
Connessioni - Bridging Worlds > References > With Yamaha, Santa takes his home in Italy

With Yamaha, Santa takes his home in Italy

With Yamaha, Santa takes his home in Italy

His homeland would be faraway Lapland, but Santa Claus may also have been conquered by the milder climate of Italy, and he opened – thanks to decisive support of Yamaha – a “branch” here in Italy too: the “Regno di Babbo Natale”, in Vetralla, not far from Rome.

The Italian address of Santa Claus is Vetralla, 50 km from Rome: the “Regno di Babbo Natale” (Kingdom of Santa Claus), over 3500 square meters dedicated to the magic of Christmas, includes a flea market, a Victorian village with a covered ice rink, an auditorium with festive entertainment and of course… Santa Claus!

But, as much as the magic of Christmas is also enjoyed by us at “Connessioni”, let’s take care now of what matters most to us, the technical side! To embellish this intriguing location, a new sound system by Yamaha, designed to guarantee visitors the the perfect Yuletide atmosphere, as “Il Regno di Babbo Natale” owner Giorgio Aquilani says, “There is no magic if there is no music.” Which explains why he relied on Yamaha to perfect the atmosphere of this particular location.

The company Musicis, based in Formello, took care of the installation. The Musicis manager Stefano Brigliadori stated: “The customer wanted an audio system which delivered great sound quality throughout every space, with 100v line background music for the commercial spaces, background music (BGM) at higher SPLs for the indoor ice rink and delivering live entertainment at the auditorium. It also had to be able to integrate a number of existing speakers, be completely reliable and easy to operate by Mr Aquilani and his staff.”
The main BGM system comprises four MusicCast WXC-50 wireless streaming amplifiers, supplying individual music feeds to the Victorian village, the Christmas market, the auditorium and the entrance. All music is stored in specific maps on a QNAP TS-231P network attached storage (NAS) unit. Powered by an XMV8140 multi-channel amplifier, 14 VXS5 surface-mount speakers are installed in the Christmas market. 14 more VX5s are installed at the Victorian village stalls, which act as fills for four CZR10 two-way passive loudspeakers and two CXS18XLF subwoofers (all with SPCVR series protective speaker covers) covering the ice rink.
The CZR/CXS speakers are driven by two PX10 amplifiers, while the system is managed by an MRX7-D matrix processor with DCH8 digital controller hub. An EXi8 input expander and two Tio1608-D Dante I/O racks (one in the Victorian village, one at the auditorium) house the inputs and outputs.

Meanwhile, two STAGEPAS 1K all-in-one portable PA systems are installed at the auditorium to deliver great sound for bigger performances. Audio is sourced from two outputs from the Tio1608-D installed in the auditorium, meaning they are volume and content controlled by the MRX7-D.
The system was programmed to be as automated as possible. Three DCP4V4S wall mounted panels control the system, two programmed with a specific volume control for the entertainers, making it very simple for them to use. The third DCP4V4S is programmed with two presets for the main system. 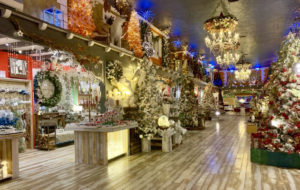 Furthermore, with the Yamaha Wireless DCP Android/iOS app, the owner Giorgio Aquilani can walk around the site and adjust the volume of each zone, depending on the level of noise being generated by customers.
But then, who knows if, with all these technological goodies… Santa Claus will never want to return to Lapland? We doubt it very much!