The Aeffe Tech company of Avellino has used products from Laserworld, Pangolin and Elation brands – all distributed in Italy by Audio Effetti – to illuminate buildings from a great distance during an event open to the public.

On 15 August, the city of Avellino saw several initiatives aimed at bringing prestige to the oldest part of the city. An audience of over 2.000 people attended the highlight event, organized by the “Resta in Centro” Association with the partnership of Aeffe-Tech, which oversaw the preparation: a fascinating video mapping projection on two buildings in the historic city center, the former Customs House and the Clock Tower.
The need was to use products that were simple to set but, above all, capable of lighting the two buildings from a location located at a great distance. The best solution came from three brands distributed by Audio Effetti of Genova. 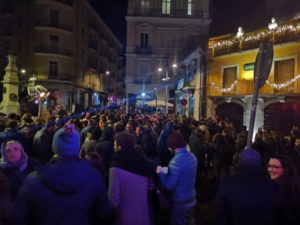 Laserworld has contributed with its tarm 5, which offer 5.000 mW of power output, while Pangolin has provided laser control with the FB4 hardware and Quick Show, a software characterized by ease of use and equipped with a remarkable image library.
Finally, Elation contributed with its Volt Q5E, a battery-powered spotlight with IP 65 protection degree, equipped with five 10 W RBGW LEDs and DMX controlled via wireless.
“We had never used a laser and we have to admit that it was very intuitive and simple to assemble”, is the statement that comes from the technical staff of Aeffe-Tech. “Given the precision of the galvanometer (45 kpps ILDA 8°) we were able to obtain a precise and sharp image and, with the high-performance Elation lights, we were able to give the public of Avellino a breathtaking spectacle without precedent.”