The visual side of ISE’s success

A total of 1,296 exhibitors, filled 53,000sqm of exhibition floor space across 15 halls. By closing time on the Friday afternoon, 80,923 had attended the show, an increase of 10.3% on the 2017 edition. And on the whole of an event full of technological innovations, we saw interesting trends in projection and displays.
ISE 2018 provided the first opportunity to see an 8K resolution projector – sort of. Some clever technology was simulating 8K using 4K DLP panels. No matter, though, whether or not it was the real deal: the images it was delivering were jaw-dropping and looked almost three-dimensional. Otherwise, differentiation in the projector market continues to be a challenge for manufacturers – especially now that anyone who is anyone has implemented solid-state illumination (SSI) as their light source. Some manufacturers are approaching the problem of differentiation by moving beyond projection and creating a complete end-to-end 4K infrastructure, with the projector as the delivery point. Others are looking to add functionality and programs that make their projectors easier to work with for integrators. But if 8K stole the show in projection terms, there was continuing evidence at ISE of how 4K screens are rapidly becoming the norm. What was interesting, though, was the growing realisation that 4K screens aren’t just good for delivering a single, stunning image. Where they really come into their own, many believe, is as what might be described as mini-videowalls, with several manufacturers showing a single panel delivering four (or more) images: 4K resolution allows each of those images to be supremely detailed.
The other phenomenon that was very apparent at ISE was the continuing shrinkage in LED pixel pitches. With smaller pixel pitches, LED displays become suitable for the kind of close-up viewing for which LCD screens have historically been widely installed. LED has many potential advantages over LCD in terms of deployability, image quality, maintainability, cost of ownership and the creative possibilities it offers. And it is, of course, bezel-less, making it hugely attractive for videowall applications. Today, the barrier is still price – but it will be interesting, at ISE 2019, to see the extent to which LED has achieved price parity with LCD.
No discussion of screens at ISE would be complete without mention of digital signage. What was fascinating was to see how the market is diversifying.  One manufacturer, keen to leapfrog its competitors, was showing an array of screens in a range of aspect ratios beyond the traditional 16:9 – including shelf-edge displays. That screens can engage consumers visually has long been a given. Now, however, much of the focus is beyond that – on interaction and engagement. There was growing discussion on the show floor about how AI, machine learning, XR and so on can be leveraged to move digital signage to the next level.
www.iseurope.org 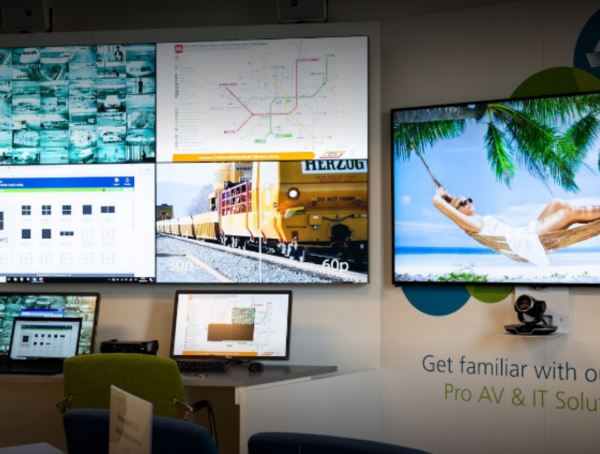 163
References
ATEN, a re-start with some new staff in Italy