Established in 1981 as a pilot college funded by three entities – two governmental and one private donor – thd Shantou University is today the first of its kind in China, a public university fully funded by several million of U.S. dollars in donations from Li Ka Shing, who also happens to be the richest man in Asia.
The futuristic Chinese University of Shantou has chosen Clair Brothers for audio broadcasting in many of its elite environments, including the Sports Park, which often hosts international artists and important ceremonies and events. With its 52.000 square meters of extension, an international level gym with basketball courts, multipurpose rooms, swimming pools and VIP boxes, the Sports Park of Shantou University is the true heart of the university complex. 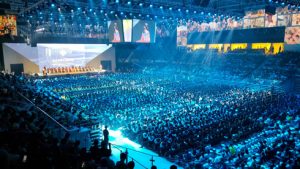 In order to accommodate such a variety of programs, the University has decided to invest in a large-scale system capable of being set up for various applications, including the important opening ceremony of the academic year. DMT, the Clair Brothers distributor in China, presented the winning system. The final equipment list at the venue consists of a thirty-two Clair Brothers C12 full-frequency line arrays, sixteen C8 full-frequency line arrays, sixteen iS218 low-frequency line arrays and eight Clair Brothers 1AM stage monitors, accompanied by SSL L500 and L300 consoles, Clair Brothers/Lab.gruppen PLM amplifiers, Sennheiser wireless systems and DPA microphones.
In order to meet the requirements of various stage settings in the sports park, the C12s can be used in numerous combinations. It all depends on what is needed that day. Additionally, the C8s can be used as an independent system combined with the lows of the iS218s when less than half of the audience field is necessary for a performance. In effect, the entire Clair Brothers system is flexible enough to handle just about any type or size production. Additionally, a pair of 8CX coaxial speakers were installed in each of the eight VIP rooms around the auditorium ensuring that the best and most consistent sound is heard at all times in all areas of the venue.
www.clairbrothers.com