The atmosphere of Carlo’s Grill BBQ is signed Audio Effetti

The atmosphere of Carlo’s Grill BBQ is signed Audio Effetti

The Italian restaurant Carlo’s Grill BBQ is much more than a place to taste excellent meat; it’s a place where customers are immersed in a 360° sensorial experience that accompanies the tasting of each dish with original atmospheres and effects

The idea was to give diners an immersive narration of the history of the place through short but suggestive video and light scenarios. The challenge faced by the installer was to integrate, synchronize and harmonize all the different technologies of lighting, automation, video and special effects systems, which have been implemented in the room. All thanks to a series of brands and products distributed in Italy by the Genova-based company Audio Effetti. But now, just wait: let’s go to Carlo’s Grill BBQ! 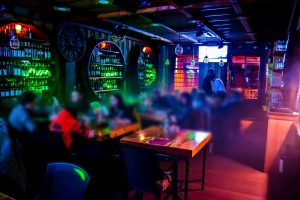 The latest technologies for scenographic lights and professional special effects have been installed inside the restaurant, from motorized spot projectors with LED engine to static projectors with multichip LED source, from UV light always with LED to professional machines for the hazer effect, up to the laser projectors, strobe effects and the Sparkular machine, capable of simulating the “gerb” pyrotechnic effect without any of its contraindications (high risk of flammability, production of fumes and odors, impossibility of use in closed environments).

The sophisticated lighting and effects system is managed and synchronized via DMX by the Visual Productions CueCore2 show controller, inside which the cue-lists and playbacks relating to each scenario and to each projector or machine have been stored, using the supplied CueluxPro software, an instrument for the design and programming of scenes and lighting effects which can then be stored in the standalone memory of CueCore2 and QuadCore.

CueluxPro is also able to use CueCore2 and QuadCore as DMX interfaces for LIVE control.
The heart of the venue’s audio/video system, which also includes numerous large format screens (75”), is a RGBlink Venus X1 processor that manages the video streams from an HD dome camera installed in the center of the room, from an ImageCue solid state mini-media server (always managed via DMX by CueCore2) where all the multimedia contents specifically produced have been transferred, or from a media-server PC with music videos.
Home automation system, lighting system, special effects, video system and audio system, they also needed a “bridge”, a system that translate all specific languages (DMX, UTP, OSC, Rs232, contact closures, etc.) and that would integrate everything into a single sophisticated system.

For this reason, IoCore2 by Visual Productions was chosen, which allowed all the technologies to function without problems. Each moment of the dinner is accompanied by an audio/video contribution and a specially built luminous atmosphere. IoCore2 is an expansion module of the solid state lighting control product family. It offers an interface for digital and analog inputs and for digital outputs and supports several other common protocols in the world of lighting control and entertainment. To create the cues and cuelists for the various dishes, CueluxPro was used and the cue-lists were poured into the processor with the DUMP function.

To complete the installation, a touch control interface was created with the Kiosc software, a surface touch app. Kiosc has made it possible to create buttons to control both the lighting system and the triggers of the individual courses, the Venus source, hazer and Sparkular. It’s also possible to connect several IoCore2 to arrange and program GPI and GPO ports. The B-Station is supported as a remote control unit. All devices are connected via Ethernet.
The existing home automation system manages:
– On/Off ceiling lamps;
– Dimmed pendant lights;
– Motorized curtains;
– Conditioning/ventilation;
– 12 open/closed contacts for scenario recall.