Mersive Technologies’ ground-breaking collaborative display platform, Solstice, is a conferencing and educational solution which allows content to be shared on a large, communal display, such as a flat-panel screen or a video projection, adding an interactive dimension to meetings, lectures and discussions. Solstice, distributed in Italy by Prase Media Technologies, features high definition video sharing from computers, smart phones or tablets over secure wireless networks.
At ISE 2019, Mersive was demonstrating the latest release, Solstice 4.0, and the new hardware, Solstice Pod Gen3.
Christopher Jaynes, Founder and CTO of Mersive, told us a little about the background of the company and the latest product. “Mersive is a unique company,” said Jaynes. “We are not an AV company; we come from computer science background. We launched Solstice about four and a half years ago, and the company has almost doubled in revenue and size every quarter since then. We have between 5000 and 6000 customers now, and many installation partners. Thirty out of the Fortune Future 50 companies are our customers, and about twenty of the top thirty business schools in the U.S. use our product in their lecture halls. We’ve grown out of the U.S. now and we continue to work with our partners in Europe”. To support them, Mersive has built a European sales team with a Regional Sales Director and a Support Engineer in each region, and in Northern Italy, in Varese, the company is actually opening first office at the beginning of April. 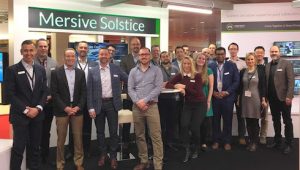 Why Solstice “works”
“The reason for our success,” continued Jaynes, “is that there is so much need to get rid of the video cable in the conference room. The video cable from the presenter’s computer to the screen or projector has always made meetings boring and terrible. What it means is that the presenter has to put together his Power Point presentation and will then proceed to show slides and talk for an hour, while everyone else has to listen. But this is not what meetings should be about. People should be able to interact.”
With Solstice, when a user connects to the network, he can simply select to show his desktop to all his colleagues. This is a video feed at a high frame rate, with no cable from the source devices. There is an app for Android, iOS, Windows and Mac OSX, so that any type of device is equally compatible. The content that can be displayed simultaneously is limited only by the bandwidth of the network.
“The only additional hardware required,” explained Jaynes, “is the little Solstice Pod that sits on the network and is secure. We spent a lot of time with the US intelligence community. They were an early investor in the company, so security is a big deal to us”. In Amsterdam Mersive launched the Gen3 platform, in which the Pod supports dual-screen output. This gives the users twice as much screen real-estate on which to put content. It also features PoE+ powering, so that there is no longer need for cabling other than network connections. This new version also has an HDMI input, because we had customers who requested this for putting content from set top-boxes or from gaming consoles onto the screen.
Concluded Jaynes, “One of our biggest users, a huge shared-workspace company, has told us that the importance of this system is not about just getting content to the screen, but about everyone feeling that they he is participating.”
www.mersive.com