About Us Search Sign up to our newsletter Menu
Connessioni - Bridging Worlds > Events > Report ISE 2019: d&b audiotechnik for integration and design solutions

After the very successful official presentation of the latest members of their SL family of large scale touring systems – the KSL8 and KSL12 line array enclosures – at the NAMM Show at the beginning of the year, d&b audiotechnik presented even more new products in Amsterdam.
The show got off to a great start for the Backnang, Germany-based manufacturer, as they took home an InAVation Award in the category “Entertainment and Live Events – Audio Technology” for their Soundscape platform at the awards ceremony on the evening of the first day of the show. The ISE 2019 show floor, instead, was the venue for the launch of three new products in theme with the system integration and installation focus of the show: the DS20 audio network bridge, the R90 Touchscreen controller and the release of the new software models of the d&b systems for the Revit architectural building information modelling (BIM) platform. d&b welcomed visitors to their stand and also to a separate demo room, where their staff hosted a continuous schedule of presentations and listening sessions of the new products.
Wolfgang Schulz, installation product manager for d&b, told us, “The d&b approach has always been ‘system-based’. This philosophy goes back to the early 1980s, when the founders decided that the best way to serve customers –independently of the type of market – is to bring everything together into a complete system, which makes it easy to handle the requirements and design and operate very high quality sound systems. Right from the beginning, for example, d&b got behind the concept of amplifiers with onboard settings for the loudspeakers in order to provide complete packages that responded to the needs, and facilitated the tasks, of customers and users.”
MILAN protocol, you’re welcome
The DS20 Audio Network Bridge is the first d&b product to support the AVB-based protocol MILAN (Media Integrated Local Area Networking), enabling seamless interoperation with similarly capable current and future devices of a number of other high-end manufacturers. DS20 provides an interface to and from MILAN networks for four AES3 inputs and 16 AES3 outputs, and incorporates a 5-port AVB-compatible switch, which provides a primary and redundant network for the Milan protocol and distribution of Ethernet control data.
“There are existing proprietary standards,” says Schulz, “such as DANTE, which we implemented and will continue to support for media networking because, though not an IEEE standard, it is definitely an industry standard and has been the best solution thus far. Instead, d&b believes very much in the future-proof aspect of IEEE open standards. It is very important from the investment standpoint. So implementing MILAN provides more choice to the customer. MILAN is a solution layer to the technology layer of AVB, and therefore is not guided in the market by a single company. So, as our amplifiers do not incorporate a media transport protocol, we offer our DS10 as a bridge to DANTE networks, and now the DS20 as a bridge to MILAN.” 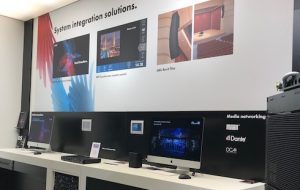 Remote control
The R90 Touchscreen remote control is a 7″ panel PC with a simple and intuitive control software for d&b audiotechnik systems in permanent installations, which operates independently of the R1 control software. It is designed to allow non-technician users to access functions such as power, mute, level and grouping, plus the recall of up to nine amplifier presets, without interfering with advanced functions like system tuning.
No additional coding is required in the installation process, and R90 provides control of systems using up to 15 d&b amplifiers. An additional remote application enables control of R90 functions from smartphones or tablets in the same network. “Studying the requirements for permanent installations,” explains Schulz, “one of the principal challenges is to provide an interface that allows simplified control of the sound system by staff members of a venue who are not necessarily specialised audio technicians. These users do not need access to the more than 3000 parameters that can be used to configure the system by the expert or designer, but rather the five or six parameters necessary for day-to-day use. At the same time, such a controller should be easy for the system integrator to implement into the ecosystem of the installation. For this we developed the hardware and software of the R90. The main difference between R90 and a media controller is that it doesn’t require any specialised programming on a third-party media control”.
Finally, for ISE 2019, d&b announced the availability of complete software models for the integration of their systems into the architectural planning platform Revit, the most important Building Information Modelling software used by architects, contractors and engineers to create realistic simulations of buildings and environments. These Revit models allow realistic visual representation of d&b systems within simulations, including versions with non-standard colours and non-branded versions.
www.dbaudio.com