About Us Search Sign up to our newsletter Menu
Connessioni - Bridging Worlds > Uncategorized > Report ISE 2019: Canon, 4K projection and 360° imaging

Canon’s has always been a varied universe, with photography as “milestone” of a vast company, which once again proves to be projected on the future and committed to extending its offer.
Canon at ISE 2019 was first of all high-quality video projection, with all the 4K range as a flagship. The latest LX-MH502Z and XEED 4K5020Z models equipped with RS-SL07RST, a new-generation interchangeable lens that supports native 4K resolution, have been the main hub of the Canon stand in Amsterdam.
The video projection, however, pervaded the participation of the company at the fair, with a wide range of creative solutions suitable for different installation environments, from small to very large environments. The integrated UHD pixel shift technology was shown thanks to the LX-MH502Z projector and to new XEED models, launched at the end of 2018, and did not miss the projection solutions for large environments (stadiums, auditoriums, hotels or video mapping applications outdoors).

The positive trend of Canon Italia has been confirmed by Massimiliano Ceravolo, Professional Imaging & Consumer Marketing Director of Canon Italia: “We are satisfied with the results we achieved in the journey started at the end of 2013”, he told us when we met him at the Canon stand . “We have expanded the product range below 10.000 lumens, particularly in the range between 5.000 and 7.000 lumens, which is the area that brings the largest volume of business. It makes me proud that in 2018 Canon Italia was awarded with the tutelage of best Country in Europe, for the number of products sold. Italy can therefore also be an example for other markets. We focused on a very precise segment, the museums, and we did so by having a DNA in the imaging and photography that allowed us to meet the needs of customers, especially in the fundamental branch – in which Canon is notoriously very strong – of color profile. In short, the value of imaging is our business card.” 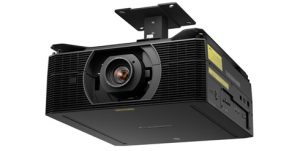 And what about the products? Ceravolo has no doubts: “The XEED world is the one that gave us the most satisfaction, but even the short-throw world has been the most distinctive factor. Furthermore, I would like to underline that last year we introduced a major change with the renewal of the EOS system. In September 2018 we launched the first Canon full frame mirrorless camera, which reduces the distance between the lens and the sensor, and not only: also enlarging the optics surface, the light no longer has to concentrate in the central band but it can spread over the whole sensor, with the result of a stronger and more incisive image, and less aberrations.”
And for the future? “Well” – replied Massimiliano Ceravolo – “the idea is to continue working to develop not only cameras but also optics, both for photography and for video projection. We are continuing to invest in research and development, and not only: we also grow as a group, with the acquisition of companies that complete our final offer. We have recently acquired Toshiba and the Canon Medical section has been re-founded, for video projection in a specialized field such as the medical one. There is not only entertainment!”
Finally, a mention to Canon’s presence in Matera, European Capital of Culture for the 2019: “I am pleased to underline” – concluded Massimiliano Ceravolo – “that we are not only investing in R&D, but also creating a certain image culture. We will be present in Matera with all the different faces of Canon, for example with the Museo della Civiltà Contadina. Moreover, on our initiative, 28 students of art and video schools from all over Europe, one for each country, will be hosted by Canon and the City of Matera for a week, during which they will each create an installation: these 28 works will then be donated to Matera as a memory of this historical passage. In short, we do not want to create only the technological tools, but also the cultural bases to make them be used by the new generations.”
www.canon.it