BrightSign at ISE 2019 launched its HD and LS Series 4 players rounding out its Series 4 player family with the latest version of the dedicated operating system (v8.0) and announced the new BNS.cloud.
At ISE, we were able to visit the BrightSign booth with an exceptional guide: Ann Holland, Marketing Vice President. The main novelties of this edition were the new media player models of the HD4 and LS4 series, equipped with updated hardware and the latest version of the dedicated BrightSign operating system (v8.0).
Both players feature major updates to the HTML rendering engine, with the HD4 now offering 4K native decode supporting HDMI 2.1 and HDR10.
BrightSign will also exhibit its more advanced XD4 and XT4 players at ISE. The XD234 and XD1034 support Dolby Vision as well as 4K video. The XT244 and XT1144 support PoE+, dual 4K video decode and 4K graphics; and XT1144 supports HDMI-In to deliver Live TV to end-points either via an HDMI cable or streaming over a network. 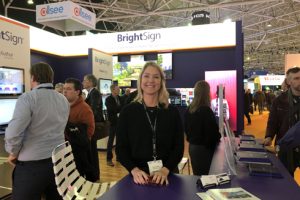 But the BrightSign stand at ISE 2019 has not only hosted product news. A host of technical integrations by BrightSign partners was presented with live demonstrations. Here is a summary of the most important:
– Room scheduling solutions running on the small, BrightSign Built-In SoC touch displays by Bluefin and Mimo Monitors
– New line of displays featuring the first 4K by Mimo Monitors powered by the Series 4 BrightSign Built-In SoC
– BlueFox with its real-time mobile phone sensing technology in BrightSign players, enabling optimization of digital signage messaging and increasing display ROI by measuring real-time customer engagement
– Comm-Tec showed Zygnage LCD poster screens powered by BrightSign
– A 5-screen BrightWall video wall BrightSign is also announcing that its BrightSign App, which allows users to easily interact with locally networked signage using a smartphone or tablet, is now available for Android as well as iOS.

The visit to the BrightSign stand was then completed by the announcement of the new BSN.cloud platform for players management, controlled via the new operating system BrightSign OS 8.0, specially created for digital signage. As Ann Holland explained, BSN.cloud is a solution composed by three clouds: at the base level, the Control Cloud subscription is included with every player. It offers BrightSign customers simple provisioning and setup options and real-time data about player health.
The Management Cloud is instead a data-driven cloud service that delivers a complete set of digital signage network management tools to the end-user. It collects and stores data about performance measures that are important to network managers such as advertising proof of play, player performance and health, remote snapshots, etc. The Management Cloud pushes out email notifications about issues important to end-users such as a subscription that is about to expire or players that are reporting errors. At the highest level, the Content Cloud adds the media library and content feeds, schedules, presentation management and content distribution tools.
www.brightsign.biz