About Us Search Sign up to our newsletter Menu
Connessioni - Bridging Worlds > References > Powersoft and RatSound, beyond the boundaries of sound at Coachella 2018

Powersoft and RatSound, beyond the boundaries of sound at Coachella 2018

Powersoft M-Force and Rat Sound SuperSub move the low frequency boundaries at Coachella 2018.
An ideal location for music fans, Coachella was a real engineering challenge for Powersoft, especially for super low frequencies. In the Sahara Tent, perhaps the biggest stage in the world for EDM music once per year, festival organisers pushed the boundaries of what is possible in sound design with an array of Rat Sound’s SuperSub cabinets — each driven by Powersoft’s groundbreaking M-Force moving magnet linear motor. Dave Rat of Rat Sound Systems, who has played an integral role in Coachella’s sound systems for 19 consecutive years, designed and deployed the SuperSub SDS30 subwoofers, which delivered massive and consistent low-end frequencies for the many thousands of music fans attending the Sahara Tent. 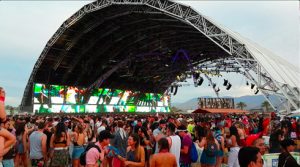 “Coachella has grown over the years, and it’s probably one of the more challenging events in the world from a sound perspective” says Dave Rat. “The challenge is the massive coverage areas, minimising offsite sound and the need for premium quality and consistency.” In short, technologies are needed that push themselves to the limits, like Powersoft’s M-Force.

Rat put together systems for seven of Coachella’s stages that utilised premium L-Acoustics loudspeakers including K1 and K2 mains and L-Acoustics KS28 subwoofers. The Sahara Stage alone featured a system totaling 252 speakers. “I think for any live sound reinforcement venue or situation, low frequency is the key for connecting the artist with the audience physically”, he says. “For full emersion in music you have got to be able to feel the sound.”
The inspiration for the design of the SuperSub was born from Powersoft’s M-Force, an innovative transducer based on a patented linear mobile magnet structure that differs from a traditional coil, taking advantage of its unique design to offer improved power management, electromagnetic conversion, reliability and maximum SPL.

With eighteen SuperSubs positioned front and centre and complementing the massive L-Acoustics system, Rat was able to deliver the a unique and powerful low-end reinforcement. In addition to peak sound performance, the M-Force motor provides the SuperSub with another valuable attribute: reliability. Coachella, with environmental factors like temperatures — both hot days and cold days — windy days, dust storms, and the sheer number of hours, needs a really tough sub. The SuperSub and its M-Force motor held up to the demanding conditions, performing without a hitch throughout the duration of the festival. Dave Rat knows that he has yet to reach the full potential of what the M-Force motor and the SuperSub design can achieve. “To use the SuperSub to its full potential, I would need to work with an artist who writes music that utilises its full frequency response”, he says. “Right now, most music is designed for existing hardware which tends to struggle below 30Hz, so if you have loudspeakers that go lower than anything else, that’s an area that has been relatively unexplored.”
But always, in the technological field, what can be done, sooner or later, will be done! The road is traced, beyond the boundaries of sound…
www.powersoft-audio.com
www.ratsound.com The availability of new Ecler products has been announced

A new class D amplifier, a new presentation switcher and a serial interface: these are the news just announced in …