About Us Search Sign up to our newsletter Menu
Connessioni - Bridging Worlds > References > JVC: new 4K projector and PTZ camera

The ISE 2017 of JVC will be characterized by 4K, with the new THX Certified projector, and video production, with the new PTZ camera KY-PZ100
During the next edition of ISE, JVC will show off its latest innovations in the field of video projection, also including the DLA-Z1, 4K projector with THX certification, based on “Blu-Escent” laser technology, with a brightness of 3.000 ANSI lumens and dynamic lighting control. DLA-Z1 is designed for 20.000 hours of total operation, with a new specific lens for the 4K and a new Cinema filter with a large color gamut, to exploit the high brightness, focusing as much as possible on the quality of the images in 4K. The visitors of ISE 2017 will appreciate the features of this new model in a dedicated room, specially prepared with particular attention to audio, developed by Bowers & Wilkins.
If the new DLA-Z1 will undoubtedly be the main “star” of the JVC booth, should not forget the interesting innovations on the broadcast side, with the new IP PTZ camera for video production, designed for both field and studio applications. JVC has always made great efforts for the development of IP cameras, since the introduction, which dates back to four years ago, of the well-known GY-HM650 professional camcorder, small and compact. Clearly, the IP connectivity is, in the philosophy of JVC, an essential part of the cameras functionality, and this technology has spread rapidly from the GY-HM650 to later models. 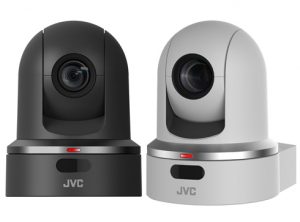 The new KY-PZ100 has unique IP communications engine and provides network connection via WiFi, 4G-LTE or wired LAN. It can be used as a stand alone remote camera or as part of a multi-camera system, and has 3G-SDI and HDMI outputs. It is also able to get streaming at 1080i/60, 1080p, 720p and 360p with two-channel audio. The camera control is via web browser or with the dedicated RM-LP100 remote control panel. The on-board recording is in HD up to 50 Mbps on SDHC/SDXC micro card. The sensor is an innovative 1/2.8”, while the lens is a 30x optical zoom.
www.pro.jvc.com