Can a nineteenth-century Art Nouveau building become an example of technological innovation, without losing anything of its artistic and historical value? The answer to this question comes from the headquarters of Confcommercio in Milan.
In order to offer an accurate service to its members, Confcommercio has decided to equip its Milan office in Corso Venezia 47 with an innovative digital signage system. Voome Networks was therefore called, which, thanks to partner Ricoh Italia, oversaw the realization of the A/V project and providing a complete digital signage solution, composed of LG displays, SpinetiX media players and the proprietary CMS (Content Management System) “Jade”, the digital signage software that represents the heart of the installation.
The objective of the Confcommercio’s management was mainly to effectively advertise all the events of the Congress Center, replacing the traditional paper posters with a completely digital system. “In our Milan offices we have several rooms, including a large convention center with about 800 seats” – explained Antonio Tascone, Purchasing Manager of Confcommercio Milano. “The need was to modernize the service to the user, exploiting it precisely for the convention center. A clear graphic with punctual messages broadcast on our monitors allows us to make the most of our spaces. For the near future we intend to use the monitors also to sell advertising to external customers, especially during special events.”

Ricoh has developed an information distribution project using a monitor that naturally also takes into account the architectural aspects of the building, Palazzo Castiglioni, considered among the highest examples of Italian Liberty. The digital signage solution implemented is a true “bridge” between past and future, consisting of 15 full HD displays by LG: two 55SE3KD 55” are positioned at the entrance of the building to welcome members and visitors, inform them of the ongoing events and direct them to the individual meeting rooms, thanks to a wayfinding system with automatic directional arrows, integrated in the Jade software by Voome Networks. The same function is performed by a third 55” monitor, designed to be positioned where necessary on different points of the ground floor, while two other mobile totems, made with 49SE3KD 49” displays, are used to advertise the Congress Center events, outside or inside the halls. 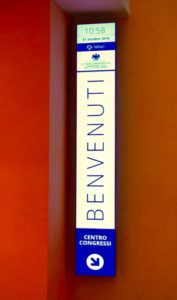 In addition to the totems, ten 22” LG 22SM3B monitors have been installed, which, outside of the various conference and meeting rooms, are able to alternate the whole event sign up with digital signage schedules. To complete the installation, an 86” Ultra-stretched display, the 86BH5C model. However, the real engine of the entire project is the Jade software platform by Voome Networks, combined with the SpinetiX HMP300 or HMP350 players, positioned behind each LG monitor.
Jade is a dedicated software that, in the Enterprise Edition in the cloud chosen by Confcommercio, allows you to create and automate even the complex scenarios typical of “Corporate communication”. The Jade software platform allows network control of the entire digital signage network, including the programming, switching on and off of the monitors. All the brands involved in the installation were distributed in Italy by AVstore.
www.voome.com