About Us Search Sign up to our newsletter Menu
Connessioni - Bridging Worlds > References > ISE 2020 according to Riedel: news for Intercom and Bolero

ISE 2020 according to Riedel: news for Intercom and Bolero

ISE 2020 according to Riedel: news for Intercom and Bolero

Also thanks to the acquisition of Embrionix, last year, Riedel develops its IP solutions by implementing well-known products, such as Bolero, and by launching a new Smart Panel that also manages the integration of third parties

Even if – in the words of Giuseppe Angilello, Sales Manager Italy for Riedel Communications for about a year – “the natural territory of Riedel would rather be IBC”, ISE 2020 has proved lively and full of news and proposals, also because the world of integration, thanks to the recent acquisition of the Embrionix brand, is certainly not outside the interests of the German company.
We start from the Bolero wireless system, for which the novelty is the possibility of integration with third-party systems. Taking care of the wireless part, Bolero can work in combination with products of different brands, easily inserting into already set up systems.
“The limit we had, as regards stand alone” – says Mr. Angilello – “was cable transport, but with the latest firmware update, transport can also take place with fiber, so we can significantly increase the distances of signal transport.”

Another important novelty of this ISE 2020 for Riedel Communication is the centrality that Smart Panels acquire, in particular with the new RSP-1232HL model, multifunction interface based on the Riedel SmartPanel app and belonging to the 1200 series. Equipped with multi-touch display and 32 hybrid-lever buttons, with the ability to interface to different apps and integrate into the most popular systems, this new model increases operational flexibility and manages third-party integration. “The 1232HL model” – adds Giuseppe Angilello – “can control not only the intercom part but also third-party Audio/Video equipment. Furthermore, having released the API, anyone can develop their own ad hoc integration with this panel. The panel becomes a central element, and does not exclude future stand alone development.”
To complete the quick review of the new Riedel products, the new node Artist 1024 is also interesting, which occupies two rack units. With ten slots available, Artist 1024 supports eight cards: two slots are dedicated to the network part, while the rest can be used in the management of audio connections. “A peculiarity of this matrix” – points out Mr. Angilello – “is that if two rack units manage up to 1024 ports, each card manages up to 128 simultaneous connections. In short, it’s a very flexible product that also allows many changes to the systems and significantly reduces the long-term cost.” 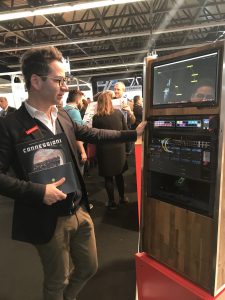 Not present at ISE, but already announced is also the new class of MediorNet UltraHD, which will arrive soon. Overall, therefore, a lively ISE that of Riedel: “Yes” – confirms Giuseppe Angilello – “despite the obvious difficulties, I noticed a lot of interest, also from Italy, for this event and for the news presented. We have many margins for development in the markets of integration, and the immediate future will undoubtedly see their development.”