About Us Search Sign up to our newsletter Menu
Connessioni - Bridging Worlds > References > ISE 2017 Focus: Genelec continues its tradition at ISE

Since the first edition, Genelec is a constant presence at ISE: this year, the company has expressed particular satisfaction for the number of visitors and for the increasingly important role of audio in the fair.

With more than 1.200 exhibiting companies and more than 80.000 visitors, the 2018 edition of Integrated Systems Europe has undoubtedly registered a remarkable success for a booming fair. The Genelec stand, according to Markus Kahelin, Genelec’s International Customer Support, “has registered an unprecedented number of visitors on all four days of the fair.” An encouraging success for a company that develops its AV installation business, even if this year at ISE has not brought great news: a further proof of the validity of the Genelec product range. In particular, the company focused on the 4000 and 8430 IP series loudspeakers, definitely the most sold at the fair. “It was not an ISE of novelties” confirmed Markus Kahelin “but rather of projects; we have shown many applications of Genelec products all over the world, rewarding the best 2017 project”. And then, let’s see the two flagships of this ISE 2018 for Genelec: the first edition of Genelec AV Awards held during the fair, and the victory of the award for the best medium-sized stand at the ISE 2018 Stand Design Awards of Exhibitor Magazine. 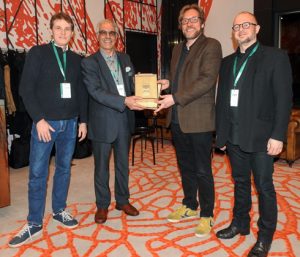 Many AV partners from all over Europe attended the Genelec AV Awards ceremony. During the evening, three of the best AV installations in 2017 were presented: the Meetech Norrsken House in Stockholm, the Moesgaard Museum in Aarhus, Denmark, and the Lyseon lukio School in Jyväskylä, Finland. In the end, the award for the best installation, after a hard decision, was assigned to the Moesgaard Museum.
The Stand Design Award has instead rewarded the work of Janne Lankinen & Petri Rantonen, and was a recognition to the entire Genelec exhibition team. The award, assigned by a group of design and marketing experts, was based on criteria such as general design, use of color, graphics and lighting, and the impact of the stand. In short, never like this year we can say that, at ISE, Genelec played at home!
www.genelec.com