About Us Search Sign up to our newsletter Menu
Connessioni - Bridging Worlds > References > Is Fuorisalone the real Fair?

Is Fuorisalone the real Fair?

Is Fuorisalone the real Fair?

If it is true that the Furniture Fair represents the central show, held in the usual location of the Fiera Milano, the impression is that Fuorisalone—with its freedom in exhibitions and “vein of madness”—is a better frame for discovering technology and innovation
A week ago, we could only hope and pray that Fuorisalone 2017 would confirm the trend already glimpsed in prior editions—that is, a decided “shift” towards an ever-greater commingling of technology and design. Predicting – you will say – isn’t hard: it’s clear that technology agrees with design, which is in itself, if we might say, a technological fact, being connected to the availability of new materials and new ways of working with them. True. But it is one thing to make a prediction and another to then verify its substance in the field, and never before has this expression been so spot-on than in Fuorisalone’s case: the mixed and layered show (officially called “Milano Design Week”) indeed takes place throughout the entire city, which becomes a huge laboratory of innovative ideas and solutions. Going around the various quarters – from Brera to via Tortona, from Lambrate to the Navigli – one discovers a new Milan, even more projected towards the future, made of fascinating technological hypotheses and daring visions of design. It would be impossible to gather everything in a brief article, so we must be happy with giving an idea of what this Design Week was. And since, one week ago in the opening, we quoted Robert Musil and his “Man Without Qualities”, again we return to Musil to draw up this statement—this miniature, dense review of the many marvels seen and glimpsed, grazed, lived and accidentally discovered. Yes, because always when visiting Fuorisalone, one has the impression of needing to trust chance a little bit. Map in hand, one can dedicate themselves to this or that installation, but they will always finish going from one to another to then discover a third that they never imagined even existed, and which proves to be astonishing. Latching on to the celebrated “absolute gaze” with which Musil opened his novel, a dizzying observation from above a big city, “seething, bubbling fluid in a vessel consisting of the solid material of buildings, laws, regulations, and historical tradition” in which “hundreds of sounds were intertwined into a coil of wiry noise, with single barbs projecting, sharp edges running along it and submerging again, and dear notes splintering off—flying and scattering,” let’s try to quickly see what (in the realm of Fuorisalone 2017) these “dear notes” were, these “single barbs” capable of sticking out, for innovation and originality, in an enormously vast and varied panorama.
Exploring the installations: art, architecture, technology, tradition…with an eye to the future
“Electronics Meets Crafts” from Panasonic undoubtedly merits an honorable mention: a tripartite installation that perhaps more than any other worked to wed technology to tradition, reproducing sounds, scents and sensations from the far-off, fascinating Japan in the tunnels of the Accademia di Brera, that is, in the heart of the oldest and most archaic part of Milan.

“White in the City”, on the other hand, in its several installations threw pure white strokes of architectural and technological thought on the city, particularly with the interesting isodynamic audio systems of Fonica International and with the almost science fiction-like environment of the Blank Hotel, both baroque and minimalist at the same time, crossed with touch and projection technology from 3P Technologies. NEC Display Solutions was perfectly inserted into the setting of this Fuorisalone with the inauguration of the new showroom at the Milano Fashion Library: a lucrative encounter of fashion and technology, between paper and video, with the latest-generation displays evocatively placed among books and collections of newspapers.
Further still, the Materials Village—quite able to be realized in the future—was a true glimpse of the “smart city” of the (near?) future, and the evocative “internal audios” offered by Bang & Olufsen with the new BeoSound Shape, a completely customizable wireless system of wall speakers, were also notable. 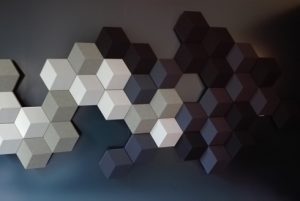 Highly interesting, even if appearing to be less technological, were the initiatives of the Fabbrica del Vapore in via Procaccini, where a collection of “stories of self-production” of design that fall in line with the current flourishing of start-ups were materialized on a large scale. 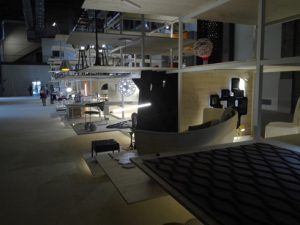 It would be impossible not to cite the majestic display of Audi City Lab in corso Venezia, dedicated to no less than the mobility of tomorrow and the relationship between man and Artificial Intelligence. Finally, on a more deliciously theoretical plane, was the very interesting talk by Koert van Mensvoort, guest of Meet the Media Guru, at the Museum of Science and Technology, about the increasingly closer relationship between nature and technology.
All in all, this Fuorisalone was a week of passions, intellectual stimuli and…kilometers covered! The only flaw, as a matter of fact, was not the mobility of tomorrow, but that of today! It was difficult, at times, to get around in this potentially Musilian city with means of transport that, between strikes, delays and route deviations, seemed – on the contrary – to be anchored to a past that I believe everyone would like to archive as soon as possible.