About Us Search Sign up to our newsletter Menu
Connessioni - Bridging Worlds > References > Panasonic at ISE 2020: IP, compact projectors and wireless display

Imagining the various applications of AV technologies like a rainbow, Panasonic’s presence at ISE 2020 is configured as a complete range of “colors”, from Gaming to Educational, from Corporate to the Rental market

Visiting the Panasonic stand at ISE 2020 was an immersion in all the “colors” of the AV. If the main novelty, in the future, can be considered the eSport Arena – with an entirely IP-based system – the innovations most related to the present are also very interesting: projectors and displays. Let’s go in order, however, and follow the “fil rouge” of the interview we had with Stefano Tura, Panasonic Project Sales Manager – Visual System Business Unit, and with Salvatore Palillo, Panasonic PSCEU Country Manager.
“What we are working on from a gaming perspective” – Stefano Tura explains – “is basically software. No more hardware, as our tradition, but the development of software that runs on a platform.” 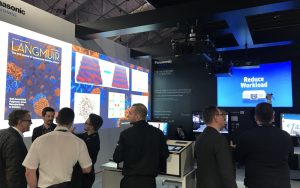 And here the reflection becomes very interesting: “In the next few years we will no longer think about signal types, HDMI, SDI, etc. We will think, instead, for IP flows. The system that we have installed here in preview, eSport Arena, has a fiber input, and you can enter it with anything you want, at the level of the signal. The only limit is the bandwidth, no longer the type of signal. Many cameras already come out on IP. Video game consoles don’t do it yet, for the moment a converter is needed, but the next evolution in this sense is already determined. This platform does not set the limits of a hardware system such as a mixer. When you buy a mixer, you have a certain number of inputs, if you want to expand the system you need to change the mixer. This solution, however, can always be implemented, as long as the bandwidth allows.”
“The mixer” – Salvatore Palillo intervenes – “will no longer be a product but a service. The integration will still be necessary, because obviously installing software still not enough. However, we are facing a real revolution in the video world.”
The official presentation of this new software born from a Gaming perspective and the related platform is scheduled for NAB 2020.
On the video projectors front, however, there is no doubt that the biggest novelty at ISE 2020 was the new 30.000 lumen model, 40% smaller than the previous model. “As for weight, there are no big differences” – confirms Stefano Tura – “because the previous one weighed 80 kg and this 70… But as regards the size, the reduction is almost half! For the rental world this is a fundamental feature, for warehouse management and transportation.”
On the market, the new model will be released around the fall of this year. Also interesting is the evolution of the PT-FRZ60 model for the Educational world, which will be available from September 2020. Stefano Tura insists on the new self-calibration system for edge blending installations: “While before it was necessary to physically set markers via computer” – he explains – “today we have a camera that reads LED or laser markers. Just point the lasers at certain key points of the projection surface and you no longer need to act on the projector software. The camera reads the markers and the screen is automatically composed. This system is interesting for long-lasting installations, for example in museums, because it becomes possible to manage them remotely; obviously it’s less useful for short-lived live events.”
The Panasonic rainbow through all AV applications certainly does not exclude the Corporate world, represented above all by the displays: “Yes”, admits Salvatore Palillo, “we are also going very strong on the displays. We basically have four series: CQ1 is the consumer series, with 400 cd models; the standard series is called EQ1; the professional series is the SQ1, to which will be added the SQ1H series, with high brightness models, from 1.000 and 2.000 cd, for outdoor and shop window applications, sector in where we were less competitive in the last few years.” 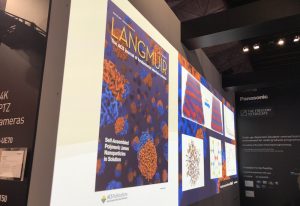 Stefano Tura concludes: “We end with ISE a year that has improved a lot in the second half. We do not have major revolutions in sight, but many innovations for the markets we care about most, starting from the Rental world. In addition, we have a number of very large projects we are working on, which however – by definition – take time. And as regards projectors, a series of measures are planned to better develop the distribution of the smallest machines, from 4.500 to 6.000 lumens.”