About Us Search Sign up to our newsletter Menu
Connessioni - Bridging Worlds > References > Idea – Video Next Generation: our report

Idea – Video Next Generation: our report

Idea – Video Next Generation: our report

It was already clear from the name that this would not be just a workshop, an open day, a presentation of distributed brands, but perhaps all of these combined. On October 23rd, Prase Media Technolgies invited customers and partners to its headquarters in Noventa di Piave, for a day of discussion and reflection on the present and future of video, starting from the concept of IDEA.

Mario Baratto, Sales Manager for Prase Media Technologies, opened the event by presenting the sold-out audience with the key to understanding: what does it mean today to be a value-added distributor? It means providing not “just” products to the customer, but “ideas” – a combination of solutions, technologies and know-how, in order to astonish the (final) customer. But it was Luca Battistelli, Multimedia Product Manager, who got to the heart of the topics: in the world of video today there are exploitable technologies, such as LCD (mature technologies with a large market and little development) and technologies that are being developed, such as OLED, which represented a turning point in the market thanks to its innovative characteristics (flexibility, transparency, thinness, lightness), but also AI, which means strategic potential for video, i.e. the possibility to analyse the conditions in which the displays are used, and optimise their viewing accordingly.

The second part of the morning was dedicated to some of Prase’s partners, active in certain markets: we therefore followed a series of analyses, case studies, examples and insights into the application of video in certain vertical markets. The first to speak was Davide Camorani of Touch Window. After reiterating how digital technology can improve work and study processes, he concentrated on the centrality of the person: it is, in fact, for the needs of users that we must begin to design digital environments. Then Giovanni Dantomio from Exhibit – a company specialising in artistic installations – and Sebastiano Antonello from Zebra Technolgies spoke about video mapping, the integration of video projection and lighting, and the role of storytelling in creating environments that are not only evocative, but where one can live out an experience. Sebastiano also sees the user as the centre of the discussion, moving from a passive subject to the driving force behind the experience.
The final presentation was by Marco Cella, Application Support for Prase Media Technologies, the title of which was very illustrative: being a curve in a world of straight lines, or how to make the language of video projection a breakthrough to attracting and engaging users. During the lunch break, which was blessed with an almost spring sun despite the late autumn, we had a few words with Sofia Boer, responsible for Marketing & Communications at Prase: “Our goal was to propose a different kind of event, in which we didn’t talk about products but about how, when integrated into complex systems, they can transform – or not – all of our working lives. It was to be an event where we wouldn’t be the only ones talking, but where our partners would speak with us and for us, from the front of the numerous vertical markets to which AV is now exerting its revolutionary power. Finally, we were pleased to host customers and partners, together with our suppliers, at our headquarters – our home – with the same pleasure and the same spirit as an invitation to dinner. It hasn’t been easy, but we are very satisfied with the results… all we have to do now is think about the next… Idea! 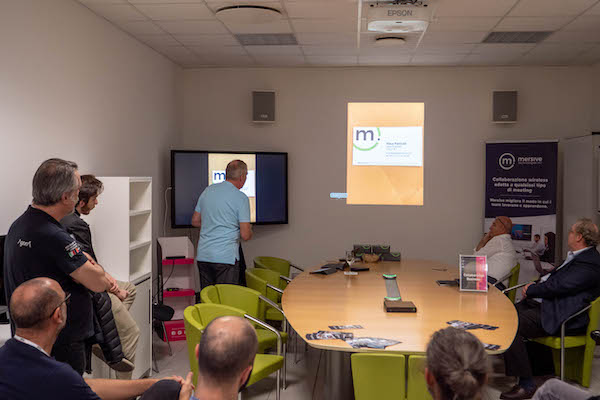 In the afternoon the attendees were divided into groups and accompanied to different locations, where some area managers and product managers from Prase Media Technologies presented and detailed solutions obtained by integrating products from different suppliers. The Board Room solution was very interesting, where Luca Battistelli demonstrated the Mersive videoconference system on LG displays, Shure microphone arrays, Biamp matrices such as Tesira, and Genelec loudspeakers integrated to communicate and collaborate remotely with the outside world. Immediately afterwards, we also visited the Interactive Hub, the multimedia space dedicated to the world of learning, with Epson interactive video projectors, Biamp’s Devio for conference rooms, Atlona switchers and scalers, and, again, Genelec sound. The final visit was to the video demonstration area, with Absen LEDwalls of various pixel pitches, large format Epson laser projections, a beautiful curved projection screen by the very Italian ScreenInt, and the mechanical genius applied to stands and accessories that we know as Euromet. In other application environments it was also possible to experience the LG transparent displays, the SuperSign digital signage solution and the Atlona Velocity control system.

We would like to thank Prase Media Solutions again for having invited us, and we’re looking forward to the next IDEA!