About Us Search Sign up to our newsletter Menu
Connessioni - Bridging Worlds > Genelec: new version of the F series subwoofers

High End Munich was the occasion for Genelec to present the new enhanced version of the well-known F series subwoofers.
The two models of Genelec’s F series  subwoofer have been improved in terms of connectivity, performance and features, and are among the most interesting solutions for streaming music and TV. The main features of the Genelec F series are the optical and coaxial digital inputs, a higher SPL, an updated remote functionality and a more complete DIP switch, as well as a general amplifier restyling, with that compact and aesthetically pleasing design that has always characterized the Finnish brand.
Connectivity has been enhanced to meet the prevalence of digital outputs in most streaming devices, televisions and sound cards, with greater reliability than analogue solutions. The digital interface is important to maintain a high signal/noise ratio when volume control is upstream, for example from a smartphone. In addition to the pair of digital inputs, both models include stereo analog inputs on RCA and 3,5 mm jacks, an analog LFE input on RCA and analog stereo outputs on RCA. The larger model, F Two, offers analog stereo outputs on XLR, making it compatible with Genelec’s professional studio speakers, as well as a Link connector for cascading multiple subwoofers. 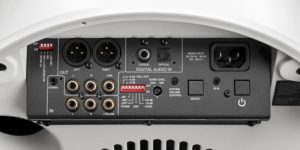 Both models allow analogical bass management with 85 Hz fixed crossovers on analog I/O and simultaneously connect all inputs, with automatic input detection and digital input priority. Even the F series electronics have also been significantly updated. A universal voltage power supply and a Class D amplifier are now available with improved efficiency in managing outputs with a higher SPL.
Finally, the range of DIP switches has been extended to offer the possibility of activating and setting the Genelec ISS Intelligent Signal Sensing circuit, which reduces the energy consumption in stand-by, and the new HT (Home Theater) mode which sets the gain at maximum when the analog inputs are in use and disables the remote control volume, allowing you to control the volume via the surround preamplifier.
Genelec is a brand distributed in Italy by Prase Media Technologies.
www.genelec.com
www.prase.it