About Us Search Sign up to our newsletter Menu
Connessioni - Bridging Worlds > Uncategorized > Fuorisalone 2019: a journey with Sony into the future of robotics

Fuorisalone 2019: a journey with Sony into the future of robotics

Fuorisalone 2019: a journey with Sony into the future of robotics

Sony, at Design Week 2019, offered visitors a fascinating overview of robotics and artificial intelligence, not only from a technological point of view but also from an application and daily perspective.
A real “look at the future”: this is how we could define “Affinity in Autonomy”, the Sony proposal for the Fuorisalone 2019. Set up as always in the Spazio Zegna, in the heart of one of the areas of Milan most dedicated to design, the exhibition imagines a world in which intelligence and technology are increasingly integrated into our daily lives and pushes us to hypothesize how the relationship between robots and human beings could unravel.
Moreover, since the launch of the first Entertainment Robot, “AIBO”, in 1999, Sony has continued to deepen the knowledge and understanding of those complex fields that are Artificial Intelligence and Robotics, which concern not only technology, but also the impact on the senses, the relationship and the behavior of robots towards human beings.
Visitors go through different sensory zones to discover five types of interaction between humans and robots:
1. Awakening: the first area is in a certain sense “preparatory”, and is dedicated to the gradual intensification of sensory awareness, which is necessary to then measure oneself with a new type of intelligence. Appropriate sensors, in a dark corridor, project images on the wall according to the visitor’s movements, literally animating the space through lights and sounds, and also acting as a guide to a future in which it’s revealed how humans interact with robots in ways unexpected and unpredictable. 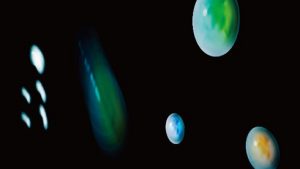 2. Autonomous: the second environment explores the independence and the spontaneous reaction of the robots through a mechanical arm: the guests are automatically detected by the arm when they enter, and the arm follows the visitors’ movements, adapting to them… and making them adapt to the relationship with a “machinic creature”! 3. Accordance: we then move on to a fascinating area inhabited by spheres, each with its own “personality”. The spheres interact, cooperate and act in harmony with each other, with unpredictable movements able to give life to real “communities”.

4. Affiliation: through continuous interaction with human beings, robots will evolve both intellectually and emotionally, and this area is designed to make visitors experience them, through “robotic puppies” that appropriately react to caresses, orders and interactions.

5. Association: in the coming years, robots will play an essential role in our lives, in society and in infrastructure. The last part of the path of “Affinity in Autonomy” asks visitors to express themselves, in turn, on the future, and on the plausibility, of this “autonomous affinity” with robots.
Yutaka Hasegawa, Head of Sony Creative Center, commented on the installation: “Affinity in Autonomy shows the evolution of the relationship between human beings and technology: a look at how the future of Artificial Intelligence can be applied to Robotics, to the discovery of the intelligence and emotions of the robots.”
www.sony.it