From August 28th to 31st, the new edition of the international festival, born in 2017 and dedicated to opera, theater and various musical genres interpreted by young talents will be held at the Corsini Garden in Florence.
New Generation Festival is an international event that presents the highest level of opera, music and live theater. Inaugurated in 2017 by three young English artists – Maximilian Fane, conductor; Roger Granville, producer, director and writer; Frankie Parham, film and theater producer – the Festival was born with the declared aim of breaking down the barriers between generations and musical genres, and to offer the best talents under 35, selected from the conservatories of high artistic education all over the world, the opportunity to perform in a unique and international scenario. For four days the seventeenth-century Corsini Garden will thus become an open-air theater, equipped with a twenty-meter stage and tiers that will offer more than 400 spectators a journey through different musical styles, with renewed acoustics, thanks to the partnership with K-array Sound Solutions and Exhibo. Moreover, for all the days of the festival, after 11pm you can still listen to music on the banks of the Arno or in the Church of Ognissanti.
The 2019 edition of the Festival will be inaugurated by W.A. Mozart, “Le nozze di Figaro”, conducted by Jonathan Santagada with the Senzaspine Orchestra. On subsequent days and evenings, they will play the Filippo Corsini Orchestral Concert (Thursday 29 August), Giuseppe Guarrera, an internationally renowned pianist, who will perform the “Piano Concerto No.4” by L. van Beethoven, conducted by Maestro Maximilian Fane. And again, the program also includes the concert “Chanson de Matin & Chanson de Nuit Op.15, Nos. 1 & 2” by Edward Elgar and, in closing, the “Symphony No.2” by Schumann. In the Church of Ognissanti, however, the Werther Quartet will perform the “Piano Quartet in E flat major, op. 47” by Schumann. 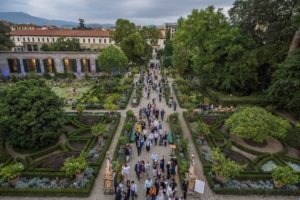 There will also be a lot of jazz music, with the world premiere “From Blues to Bebop: the Spirit of Harlem”, scheduled for Friday, August 30th: a celebration of Harlem and its contribution to folk music, unique in its kind, which features some of the most extraordinary musical voices of the new jazz renaissance: Shenel Johns, Patrick Bartley, Jr., Christian Tamburr, Michela Marino Lerman, Mathis Picard, Kyle Poole and Russell Hall – under the direction of Dominick Farinacci.
Saturday, August 31, a great conclusion! On the program is a replica of the “Nozze di Figaro”, followed by swing dances in the Corsini Garden with a ten-piece jazz band and a night set by DJs Youp van der Steeg and Harold van Lennep.
www.exhibo.it
www.k-array.com