About Us Search Sign up to our newsletter Menu
Connessioni - Bridging Worlds > References > “Come together!

The opening of the new Adam Hall Experience Center.
The first experience of the new Experience Center from the German company, found in Neu Anspach in the suburbs of Frankfurt am Main, was its opening, preceded by an invitation that arrived more than a year early. The only ones present from the Italian press, we were able to “experience” (which is definitely the right word in this case) the new building, a direct emanation of the spirit that permeated the entire evening. The same that, as founder David Kirby reminded us, has permeated the history of Adam Hall, or rather its passion: “Everything was born in the ‘70s by our passion for music, and above all for events and event technology.” 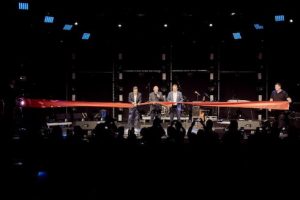 The visit, in the company of Fabio Deambrogio, Sales Manager Italy and Grazia Lofano, Inside Sales Representative, helped us understand not just the plurality and richness of the project, but also the idea behind it. The new warehouse, built with aesthetic grace and innovative materials for a total investment of over 20 million euro, hosts a showroom, intended both to show solutions but also become a work instrument, accompanied by a theatre for seeing Adam Hall technologies at work during live shows and events. On the ground floor there is a large reception area with a patio, a restaurant area (open to employees and their friends and families, but also to the general public)—compliments of the evening’s “Come together” motto, a relaxation area where members had the pleasure of displaying some true “relics” of their possession, collected during tours and collaborations with many artists. An original LP autographed by the Beach Boys, a black bag that belonged to Michael Jackson, or an enviable collection of guitars, everything was “crowned” by the historical motto from the ‘80s, fitting here like a glove: If you can dream it, you can do it! 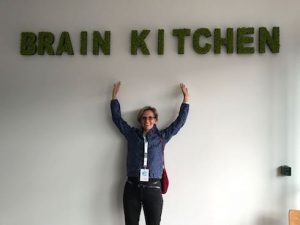 On the first floor is the large and welcoming Brain Kitchen, the study area where new projects are born (and where there also happens to be a kitchen!), the adjacent terrace where designers’ minds can rest in a real Japanese garden (during the evening, though, it is designated as a barbeque and bar), while on the ground floor there is space for product testing, from an anechoic chamber to rooms for measurements and mechanical tests. Last but not least is the storeroom, situated in the adjacent warehouse (the old one), part of which is automated with a sophisticated system of material research, in order to speed up deliveries as much as possible (taking a leaf out of Amazon’s book). A space to live, think, work, invent… and share. 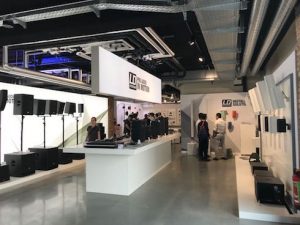 The evening, without any large preambles, began with an exhibition by Adam Hall’s musical group composed of employees, of course including David Kirby on the guitar and our friend Nikke Blout, Marketing manager, on the drums, which was followed by several speeches by members. Following founder David Kirby was Alexander Pietschmann: “We decided on this important investment because the market requires courage, innovation and increased client orientation. Our ‘mission’ is to create technologies for events that help people bring about their creative ideas, their emotions, so that the public can share them. We spend a lot of time in front of screens, but the true social network is events, and the magic of being together to share emotions.” 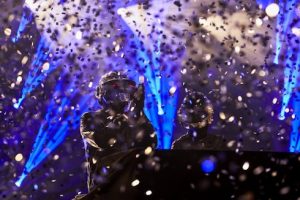 COO Markus Jahnel concluded: “In the last ten years especially, the company has grown greatly and has developed to becoming a complete manufacturer and supplier for event technology in the sectors of professional audio, LED lighting, stagecraft installations and flight case hardware.”
The evening ended with a memorable performance by a famous group of the global electronic music scene. A “Come together” that will certainly stay with us!
www.adamhall.com