This year, BFI also presented the Embankment Garden Cinema, a 820-seat temporary projection room, featured thanls to Christie’s participation
Following a successful debut at last year, the BFI once again presented the 820-seat Embankment Garden Cinema – a full-scale, temporary venue constructed to the highest technical specifications including 4K projection. A hugely popular addition last year saw almost 30,000 visitors in just 10 days.
The 61st BFI London Film Festival screened almost 250 films from both established and emerging global film-makers over 12 days at the Embankment Gardens Cinema. The venue was a bespoke auditorium specially constructed for the Festival and benefited from a 16m wide screen and 4K projection from Christie. The Garden Cinema also provided a real connection and stepping stone between Festival screenings in the West End and the BFI’s home cinema at BFI Southbank. 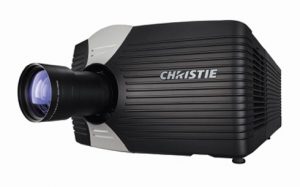 The Embankment Garden Cinema was a rigid-bodied structure complete with tiered cinema seating, black box lining with serge, plus a full box office area and bar. Christie supplied two Solaria CP4230 DLP projectors which were installed on a 6m high platform at the rear of the auditorium. The projectors used the 6KSP lamps, and as there are no 3D screenings, the matt white screen ensured enhanced 2D image quality.
Dominic Simmons, Head of Technical Services at the BFI, said: “It’s no easy task to construct a high spec 820 seat cinema in a matter of days but it went spectacularly well. We had an enthusiastic response from everyone which meant we were very keen to repeat it. We made some small improvements for this year and with the help of our partners such as Christie, we were able to give our audiences the big screen BFI London Film Festival experience in a unique venue.”
Phil Lord, cinema sales manager for Christie EMEA was happy once again to be involved in the project: “We have been a projection partner of the BFI for many years and being a key part of the Embankment Garden Cinema team was a highlight so far in the relationship.”
www.christiedigital.com