It was January 2010 when Casio launched the world’s first projector with a hybrid LED-laser light source. Ten years later, with about one million projectors sold, Lamp Free is still more than just competitive technology.

Mercury-free video projection, ten years ago, was undoubtedly a revolution. In fact, the Casio launch of the first model with a hybrid LED-Laser source dates back to January 2010. This date makes a certain impression, especially when one considers that the international treaty for the reduction of mercury emissions (United Nations Minamata Convention) was only signed in 2017! There is therefore the measure of how much the Casio brand moved in advance, compared to a need ratified worldwide only seven years later. 128 nations have joined the Minamata Convention, including Italy. Since 2016, several models in the Casio range have been awarded the TCO Certificate for sustainable IT products.

Today, thanks to the strong advance with which the Lamp Free technology has been presented, these projectors are widespread and are used in many sectors, first of all the Education world, with about 40,000 schools all over the world that have adopted these ‘Lamp Free’ types, i.e. free of mercury vapour. 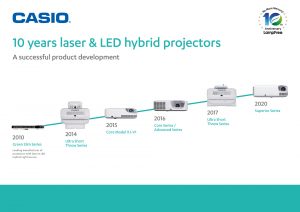 There are six current series of Casio projectors with LampFree source, capable of offering a brightness of up to 5,000 lumens and a duration of 20,000 hours: in school use, this translates into about 15 years of daily projections without the need to replace the lamp and filters, where traditional lamp technology requires, as is known, frequent maintenance operations.
In addition, the hybrid Laser-LED source allows you to save up to 50% of electricity, with benefits for the environment as well.
But let’s quickly retrace the main stages of the worldwide affirmation of this innovative technology. In 2010, as we said, the hybrid Laser-LED technology was born with the ultra-thin ‘Green Slim’ models, characterised with portability (these are projectors that fit in a backpack) with luminous performance that reached 3000 lumens.

In 2014, there were the ultra-short throw models (UST series) and entry into the educational sector, followed in 2015 by the XJ-V1 model, which further extends the diffusion of LampFree technology. In fact, until 2015 SSI (solid-state illumination) technologies had the limit of a significant price gap with traditional lamp models. The Casio XJ-V1 model breaks the mould and makes LampFree projectors accessible to all budget levels.

Another very important step dates back to 2019, with the launch of the Superior Series and, in particular, of the XJ-S400UN model and of the Educational Solution functions. With its 4000 lumens, WUXGA resolution and easier wireless connectivity from PC and mobile devices, this model has further developed Educational and Corporate applications.
At the end of this ride, Casio General Division Manager Günter Grefen said: “We attach great importance to issues of environmental sustainability. With our projectors we have shown that there is no longer any need to use traditional lamps, which contain mercury vapour.”