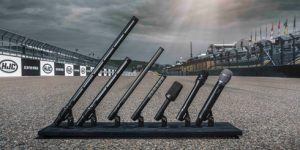 The new 3000 Series wireless systems and the new Engineered Sound 935 goose necks, with Dante connection, were chosen instead for pre and post-race press conferences, while 30 BPHS1 model headphones are located in various commentary stations. In addition, 72 M60X headphones and ATH-E50 in-ear headphones allow MotoGP teams to listen to the live audio signal.
Audio-Technica solutions have been used since the first European race of the 2019 MotoGP season held in Jerez, Spain, in May. Immediate, in particular, was the success of the microphones (specially designed for use in sports broadcasts) BP28 and BP28L with large diaphragm.
Daniel Laviña of Dorna Sports, technical director of the media, said: “We immediately noticed a great change in the quality of the audio track when the Audio-Technica microphones were installed. With their wide frequency response and high SPL threshold, they proved to be very suitable for the sound of competitions and now we can have a high quality audio continuity between one camera and another ”.
For his part, Audio-Technica’s head of global engineering, Kazuhiro Onizuka, said: “We are delighted to have been selected as a supplier for MotoGP microphones and that Dorna has used so many of our broadcast microphones. Working with Dorna during the live MotoGP races around the world is a great opportunity for our research laboratory and once again demonstrates Audio-Technica’s commitment to the broadcast industry.”