Recently, the closing press release of ISE 2019 was released, with new attendance records: it was an interesting edition, as everybody knows, but the numbers can offer some more considerations. If every fair is the mirror of the market that represents, people working in the sector are authorized to think that they are spending their energies in the right direction.
First of all the visitors: the registered visitors of ISE 2019 were 81,268, compared to the 80,923 in 2018; still a growth, although less pronounced than in previous years. But it is also understandable that the majority of the market is covered, and it is no coincidence that both the fair and the associations behind it, especially AVIXA, are working to include all the professional involved in the sector, like end users pro, and not only the System Integrator and installers. The number of new visitors has also fallen by a few points, from 38% to 31%, this is also a sign of the stabilization of attendance. On the other hand, the 20,000 admissions registered for Friday, the last day of the fair, are interesting, as they speak of a “accredited” and consolidated 4th day. 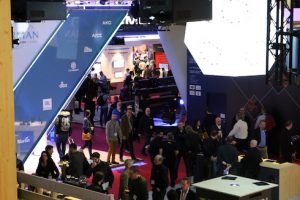 The space of the Amsterdam RAI has long been exhausted, forcing the organization to set up two technical structures to host the companies that have not found a place (and move the fair to Barcelona from 2021); built very well, at the same time they created a bit ‘of disparity between the locations of the stands. Hand in hand with the visitors, the number of exhibitors also grew, and the number of exhibitors: 56,100 square meters, compared to 53,313 last year, and 1,301 exhibitors compared to 1,296 in 2018, also a figure consistent with the correspondents attendance numbers.
The training, as always, was one of the highlights of the show, this year with the new locations at Hotel Okura, a few steps from the RAI, where most of the conferences were located, also to gain rooms and meeting spaces inside the RAI: ​​apparently the short walk (or shuttle transfer) did not discourage the participants. On the other hand, the pre-exhibition conferences remained within the walls of the RAI: our AudioForum, with over 140 subscribers for a program between sound design and technology, and the Smart Building Conference, organized by ISE itself. New this year, the Main Stage of Hall 8, designed to attract visitors to the most remote Hall of the event, where best practices and interventions by experts and “futurologists” were presented.
However, events and speeches related to AV and creativity, this year’s theme, were a little below expectations: Bart Kresa, who held the opening keynote, is a valued artist, but perhaps not equally able to involve the public in possible scenarios, while the two works on the outside, his Sviatovid – videomapping on a geometric shape of 5 m high, placed at the entrance G – and the mapping on Hotel Nhow, next to the RAI and now almost finished, have interested but probably not pushed visitors to nWow.
Waiting for the most complete report that ISE divulges in early March, we close with another number: the 30 years of activity that CEDIA celebrated at ISE, with an even more complete panel of seminars and a cut of the cake in front of 200 guests.
www.iseurope.org