Five new models of solid-state projectors are coming to market by the brand Digital Projection, distributed in Italy by AGMultivision
The ISE 2017 of AGMultivision promises to be very interesting: at the booth of Digital Projection (F44, Hall 1), in fact, will be presented five new solid state lasers projection systems, including the remarkable Insight Dual Laser 4K (4096×2160) 27.000 ANSI lumens, thanks to which will be made a projection of 4,5 meters wide. The salient features of this projector are the real 4K resolution (4096×2160), the brightness of 27.000 ANSI lumens and native contrast ratio of 2000: 1. The absence of lamps also ensures a long use of the device without the need for maintenance. In addition, Insight Dual Laser is capable of projecting 3D content in both sequential formats and dual-pipe (right video signals and separate left). The projector can also be remotely controlled with the appropriate Projection Controller application. 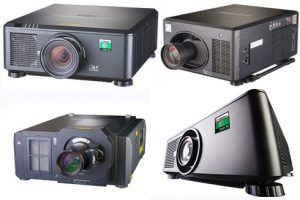 But the news does not end there: the other projectors presented at ISE 2017 will be a 12.500 ANSI Lumen HIGHLite-4K UHD, which extends the range of the Highlite series with a 4K model, two new models of the E-Vision 3D series, with standard integration capabilities of picture in picture (PiP), edge-blending and geometry correction and a real-time clock for automation applications, and the new Mercury Quad 20.000 ANSI Lumen. This projector provides an enhancement of the TITAN lamp projection system and a new more modern design with four 465W lamps.
As for the models of the E-Vision 3D series, they are two laser projectors respectively 7.500 and 10.000 ANSI lumens. The 7.500 lumens model is a single-chip DLP projector with 4K resolution and Dynamic Black technology, which offers a contrast ratio of 6000: 1 or 20.000: 1 in High Contrast version.
The 10.000 lumens model adds extra brightness to the range with WUXGA resolution (1920×1200 ). Finally, the new HIGHLite-4K UHD model is a 3-chip DLP projector with a brightness of 12.500 ANSI lumens and a native contrast ratio of 2.000: 1. Further innovations were also announced for the M-Vision range, with the new M-Vision Laser 15K, single-chip DLP projector for large format projections.
https://www.agmultivision.it/
http://www.digitalprojection.com/