About Us Search Sign up to our newsletter Menu
Connessioni - Bridging Worlds > References > 57ª Biennale d’Arte in Venice. AV technologies and missed opportunities

Videos, screens, projections, videowalls, LED walls, mapping: the 57th Biennale d’Arte in Venice, a series of exhibitions that take place from the 13th of May to the 26th of November 2017 in the whole city, shows us a bigger and bigger intertwinement between contemporary forms of expressions and digital technologies. If, on one hand, it seems to register a sort of movement back in time, with the more and more frequent choice of traditional media like painting or sculpture, on the other a growing number of artists seem to employ AV technologies, sometimes within complex multimedia strategies. These strategies can either start a dialogue with the surrounding environment (see the increasingly frequent phenomenon, for instance, of site specific installations) or be integrated into wider immersive and participative systems, at the point of, sometimes, stimulating a questioning of the notion of art in itself.
It is the case, to quote one of the most significant projects to this extent, of Green Light, a project ideated by Danish light artist Olafur Eliasson in collaboration with Thyssen-Bornemisa Art Contemporary in Vienna and with Italian furniture and design brand Moroso. The initiative involves, in the form of a workshop that will finish with the end of the manifestation, eighty refugees and asylum seekers, which are called to collaborate with the visitors in the making of modular lamps, on a model previously provided by the artist. Made with recycled and eco-friendly materials, Green Light modules work at the same time in autonomy and within complex structures, and their production is part of a wider fundraising campaign launched by two NGOs working with refugees (Emergency and Georg Danzer Haus). In the direction of a better integration between Arts and technology is also the Nexus Pavillon initiative, an international symposium that took place in the Biennale headquarters, Ca’ Giustinian, on the 2nd and 3rd of February, and that involved artists, curators and researchers. Between the most remarkable Art pieces we indicate U.S. artist Charles Atlas’ The Tyranny of Consciousness, a five-channel video installation in which the images of twelve sunsets are accompanied by those of two mysterious countdowns; New Zealand artist Lisa Reihana’s Pursuit of Venus [infected], which re-evokes the death of James Cook in the Hawaii islands through the cyclical sliding of a multi-dimensional space screened on the wall through a rig of five synchronized projectors. Completely based on integrated environments, in this case very far ones (Venice and Jakarta), is Tintin Wulia’s project 1001 Martian Homes. Through a set of video cameras and video projectors connected in real time via Internet, the visitor is called to look through the eyelet of a door, and the video recording of their eye will be inserted in a database and screened via software, randomly, in a museum of contemporary art in the Indonesian capital (and vice versa). 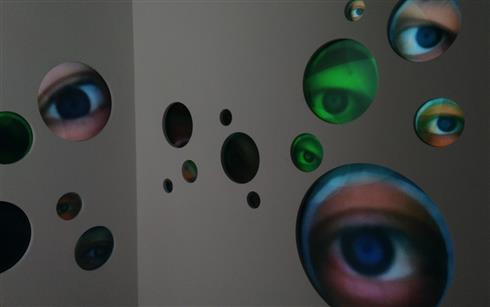 More radically, Peter Miller with his Stained Glass prepares, in a room, the projection of an 8mm film made “invisible” by the absence of the aberrant lens, projecting on the screen and making visible nothing but the flickering of the projection lamp. Turkish artist Hale Tenger’s Balloons on the Sea is another evocative seven-channel video installation, entirely based on a vivid color rendering. From Turkey comes another installation, too: a smart environment of thirty-five speakers that give shape to Cevdet Erek’s project Çın, a “sound-ornamented inner façade and platform”, or a sort of variable soundscape of rumors and whispers that activate themselves with the passing of the visitor, in a reflection on the subjective and ephemeral character of listening.

We report the presence, eventually, in the Northern area of the Arsenale, of the new-born HyperPavilion, dedicated to digital technologies and new media, presented by Fabulous and curated by Philippe Riss-Schmidt, with the purpose of overlapping and short-circuiting human and digital consciousness through concepts such as graphical identity or augmented reality. Particularly effective is Claire Malrieux’s Climat Géneral, a series of “dynamic generative” paintings projected on a circular 360° surface, with a 14m diameter, as a sort of new media Nymhéas.
Ultimately, the final impression is that of an always greater commingling between artistic expression and Digital Signage, which, unfortunately, is not always explored to its true potential. On the contrary, it is often favored merely for the reason of transportation costs. If the convergence between artistic expression and digital signal, at the level of the production and reproduction devices, is often always inescapable, it is not the same for that between artists and engineers, an encounter which is still very far off: nonetheless, a few signs of this exchange are already here.
Link to the Biennale website: http://www.labiennale.org/it/arte
Link to the Green Light project website: http://olafureliasson.net/greenlight/